Posted by EcoAdapt on October 09, 2019
Behind every coastal community is a team of government officials, academics, and community members working tirelessly to maintain the vitality of their prized resource. California’s coast is particularly special – sunbathers, whale watchers, divers, and fishermen alike can all find something to enjoy here. Nearly 26 million Californians live in coastal communities, and the coast is home to 80 percent of California’s wages, and 80 percent of its GDP. California’s coast is obviously critically important to daily life, and when three in four Californians say the condition of the ocean and beaches is very important to California’s future economy and quality of life, we’d better listen.


At this year’s Coastal Resilience Workshop (now in its fifth year), planners, practitioners, funders, and academics shared lessons learned and strategies for implementing coastal resilience projects. I learned that it’s always a good idea to engage the community by listening first. And the term “managed retreat” should be avoided at all costs. (Maybe try a ‘graceful step back’ to paraphrase one of the panelists).

Shorelines are a waterfront community’s first line of defense against rising seas. As king tides and storm surges continue to inundate low-lying coastal communities, planners are deciding what strategies best mitigate those impacts. Natural solutions, such as living shorelines, surfaced throughout the workshop. Seth Bothwell, Executive Director of the California Coastkeeper Alliance, described the progress Orange County Coastkeepers are making on their living shorelines. As the name suggests, living shorelines use plants, rocks, and other natural materials to protect and stabilize the coastal edge. Not only do they act as barriers to ocean waves, they are cost-effective, enable plants to grow over time, promote biodiversity, improve water quality, and are simply beautiful to look at. Because living shorelines provide so many ecological, aesthetic, and recreational benefits, one wonders why seawalls made of concrete are still constructed. Even the graphic above paints seawalls as a murkier, visually unappealing alternative.

What does this mean for the future of shoreline adaptation? Should we do away with seawalls entirely? Not exactly. Bothwell’s presentation was followed by a presentation by Brian Strong, Chief Resilience Officer and Director for the City and County of San Francisco. In it, he described San Francisco’s plans to reinforce the concrete wall surrounding nearly three miles of the city’s coastal edge. 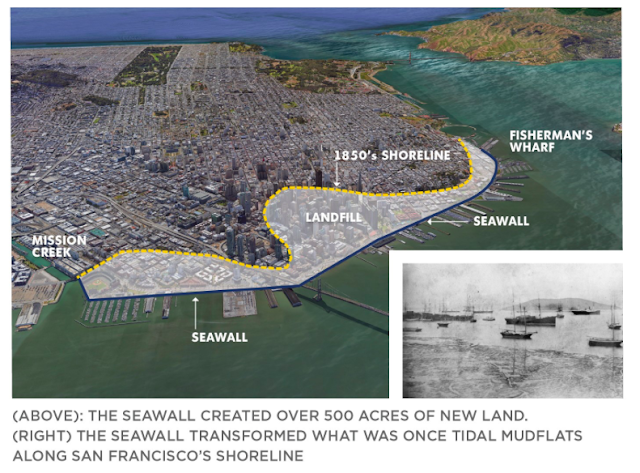 While living shorelines help native plants and animals thrive (you can find lots of example projects here), San Francisco’s Embarcadero Seawall supports a dense, urban landscape composed of parks, local businesses, and transportation infrastructure. The Seawall attracts more than 24 million people each year and supports over $100 billion assets in annual economic activity. This hardened seawall is the backbone of the city, and is now in need of some major upgrades. SF citizens agree and voted in large numbers to pass Proposition A, a $425 million bond dedicated to strengthening the century old Seawall.

Adaptation will always be multistep process and identifying the best strategy isn’t always clear. A bustling city such as San Francisco demands a much different strategy than its quieter counterpart in Orange County, but it’d be difficult to decide whether a seawall, a living shoreline, or if (dare I say) managed retreat is the best option without conducting a proper assessment first.

Before assuming one strategy is better than another, it’s important to first understand where the strategy will be employed, what are the societal and ecological implications, and how the strategy fits with the system’s long-term goals. There’s no straightforward answer to these questions, but assuming a strategy is best simply because it’s popular could be very hurtful in the long run.

To learn more about the different steps to adaptation, the check out EcoAdapt’s Ladder of Engagement.