New Report: The State of Adaptation in Public Health

The State of Climate Adaptation in Public Health: An Assessment of 16 U.S. States

EcoAdapt scientists examined if and how climate change is being integrated into activities at public health departments and other agencies and organizations through an analysis of state climate adaptation and action plans, hazard mitigation plans, and health department plans.  Our goals were to identify activities to prepare for, respond to, and recover from climate-related challenges, and to determine the expressed needs of health professionals who are interested in taking action. Similar surveys have resulted in synthesis reports and case studies, including those related to marine and coastal adaptation projects in North America, freshwater projects in the Great Lakes region, and water resources projects in the Southeastern United States and Caribbean.


The survey of public health officials found that climate change is having a significant negative effect on the health of individuals. Climate-driven changes are contributing to decreased air quality; increased ground level ozone and particulate matter; increased asthma attacks and premature deaths; prolonged pollen and allergy seasons; increased mold growth and persistence due to increased temperatures and precipitation; heat-related illnesses (e.g., heat exhaustion, heat stroke) and death; and susceptibility to water-, food-, and vector-borne diseases.Public health officials and other decision-makers are tasked with the challenge of developing strategies to prepare for, respond to, and recover from the effects of a changing climate.


The majority of initiatives surveyed focus on capacity building, such as increasing public awareness through outreach and communication efforts related to climate change; creating resources and tools; and enhancing collaboration between state health departments and others. For example, the New York State Department of Health partnered with the New York State Office for the Aging to develop materials for senior citizens, including adding a link to the Cooling Center Mapping Application on their Aging Services mobile app, which connects older adults with information on health, housing, and transportation options.


Nongovernmental actors and tribes are also working to advance health-related climate adaptation action in the study area. For example, North Carolina’s Medical Advocates for Healthy Air and the Ohio Clinicians for Climate Action networks convene medical and health professionals to raise awareness of and advocate for climate change action. Several tribes have prioritized planning for climate change impacts on public health. Examples include adaptation planning by the Saint Regis Mohawk Tribe in upstate New York and the Puyallup Tribe of Indians in Washington State to maintain access to healthcare facilities and emergency services to at-risk populations.


Products generated from this project include: 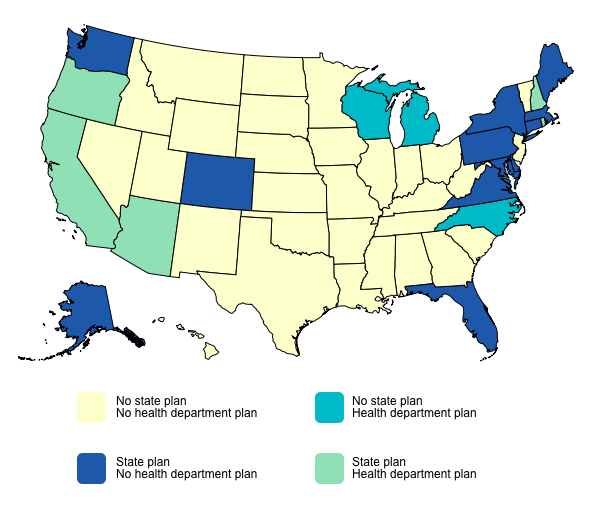 U.S map of official state climate adaptation and state health department climate action plans. States indicated to have neither plan, may have a developed literature review, executive order, policy, or other legislation that incorporates climate change and public health, however there is not an official and available state-wide plan. See the full State of Adaptation in Public Health report for more information.

To learn more about the State of Adaptation Program and this project, visit EcoAdapt.org.


To join the CAKE community and learn more about climate adaptation, visit CAKEx.org.