EcoAdapt is Recipient of 2015 Business Achievement Award for Adaptation

Posted by EcoAdapt on March 01, 2016
Every year, the Climate Change Business Journal (CCBJ) recognizes outstanding performance in the climate change field with their Business Achievement Awards. EcoAdapt is pleased to announce that we were chosen to receive the 2015 award for Advancing Best Practices: Climate Change Adaptation and Resilience. 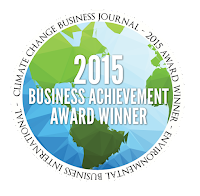 Nominations for the 2015 CCBJ Business Achievement Awards were accepted in 200-word essays in either specific or unspecified categories. Final awards were determined by a committee of CCBJ staff and CCBJ editorial advisory board members.

EcoAdapt was recognized for providing valuable support, training and assistance to local adaptation practitioners in the public and private sectors. Program and project accomplishments from 2015 that garnered attention include:


For more information on the other winners of the Climate Change Business Awards, visit http://ebionline.org/business-achievement-awards.